On Posted on June 11, 2021 by communications to Headmaster's Message

This week the world lost a man who is arguably one of the most influential individuals in recent memory, that has lived on the planet, Professor Edward de Bono. Professor de Bono probably had one of the greatest effects on how we, as educators, go about our profession. His ideas have been challenged, disputed but continue to withstand the test of time.

I had the privilege and honour of meeting this Old Edwardian some years ago. He smiled when we were discussing the need for thinking in education. Not learning by rote, but critical, reflective thinking. When I explained the process of TUL, then at its infancy at St Edward’s, he again smiled and hinted that he (his ideas) had come ‘full circle’. 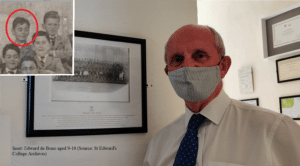 In an interview with Kenneth Vella in July 2018 in the Times of Malta, Professor de Bono said, “I would like to see thinking taught in all schools in Malta and abroad”. Well, Professor de Bono, your ideas have come home to roost and are thriving and growing at St Edward’s as we pursue Think, Understand, Learn. TUL. ‘Do not learn unless you understand, to understand you have to think!’

Parents, staff, and students, all of us, would do well to remember that, as boys pass through St Edward’s, we are the privileged ones who do have a direct influence on the manner in which they develop, as individuals and especially as ‘thinkers’.