The Sportsdesk has reported that Timmy Vassallo a Year 7 St Edward’s College student,  has secured overall victory at the Ragusa Kinder Cup Regatta. Jonas Micallef too is an Edwardian and successfully finished the regatta.

Competing in the Optimist division, the Malta Young Sailors Club sailor was in control of the competition right from the outset as he managed a consistent top-three placing in all nine regattas held in Italy.

In fact on the final day of the regatta Vassallo managed two first-placings and finished second in the other race to seal top spot with 12 points. 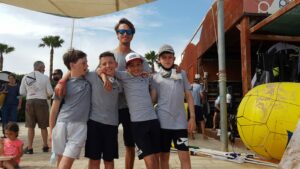