Synergy and positivity were two main elements which the Quality Assurance Department within the Ministry for Education observed recurrently in their recent visit to St Edward’s College. In a report compiled by the QAD following a day of discussions and observation, the QAD had high praise for the educational techniques implemented by the College’s Senior Management team. Headmaster Nollaig Mac An Bhaird said that this was a top-notch report, one which is the result of all the hard work of the teachers and staff for the good of the students. 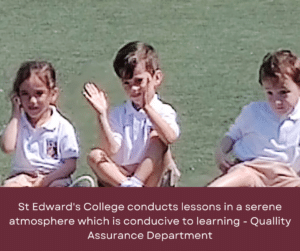 Teaching in a serene atmosphere

The reviewers noted that the lessons they observed were conducted in “…a serene atmosphere which is conducive to learning.” They attributed this to a “…positive rapport between the educators and learners and the effective classroom management strategies implemented in class”. The QAD team noted a positive school ethos which they attributed to a shared vision among all the staff: “The distributed leadership approach, the synergy among the members of the Senior Leadership Team, collaboration… and… positive relationships between educators and learners are among the factors contributing towards this ethos.” Commenting on this sharing of vision, Mr Mac An Bhaird said that this aspect is vital in ensuring that all key areas of the college education are cemented together and move forward together seamlessly. 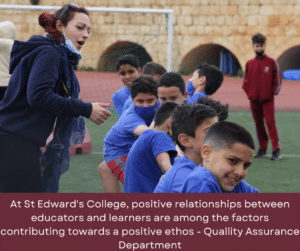 Referring to the lessons which they had observed, the QAD team said that the teachers “… planned their lessons well, had clear learning objectives and made use of manipulatives, visuals, and other resources to facilitate the learning and teaching processes.” They added that the teaching staff worked in “…synergy for the benefit of all learners in class…learners were meaningfully engaged.” They also noted that the direction of the college in engaging critical thinking was reaping results: “Think, Understand and Learn pedagogy. … helped learners to think and reason things out.”

Mr Mac An Bhaird thanked the teachers and staff for their hard work which, he said, very obviously spoke for itself, and it spoke volumes. 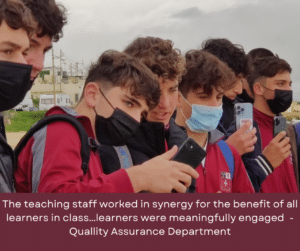