On Posted on June 6, 2022 by communications to College Blog

Oh, what a night!

In the days when balls were one of the few socially acceptable ways of mingling, the success of a ball would be measured by the state of the ladies’ slippers: if they remained intact, the night was poor, if they were worn through the night was a success. We can safely say that there were many slippers which, had they been hand-stitched as in days of old, they would have disintegrated!

The St Edward’s Ball was a huge success all around, thanks to the great work done by Mr (and Mrs!) Peter Moore. The Xara Lodge proved to be a great venue with tasty food and flowing wine. The music was an inducement to some post-repast exercising and the excitement of a silent auction rounded the evening off well.

The college thanks all those who attended especially SEPTA and the Old Edwardians for their support. 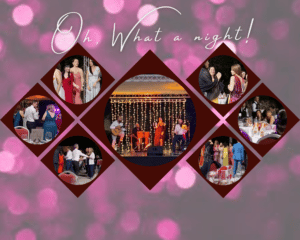 PreviousPrevious post:A tribute to an Icon
NextNext post:Horsing around
Beware of Spam Email