On Posted on June 25, 2021 by communications to Junior School

For the last lesson of the final term, the year 7 students had to create a playing card-portrait design with the use of symmetry, after measuring and making observations about playing cards in a traditional deck. They did not have to depict their character as ‘royalty’ but they were required to develop detailed patterns in their character. Students were lead through a process of a simplified line drawing of a playing card; filling in using patterns and textures, symbols, and objects which relate to their character. 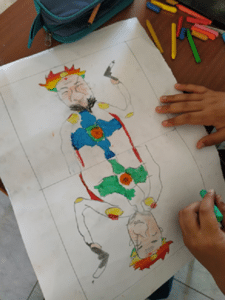 Their objectives throughout the lesson were, look and study several different types of playing cards, identify the common factors each playing card has, and make sure they add them in their artwork to make the craft authentic.

Initially, Mr Stilon, their art teacher, discussed with them the history of playing cards in brief and how they developed to what we know today. After showing them different examples of playing cards, they discussed the overall design whilst also challenging them to notice different components in the design, also moving their attention on to details like the frame, the symbols, letters, as well as colour schemes used in each card.

After evaluating the design, Mr Stilon advanced to explaining the project and how using rotational symmetry will help them be able to draw and come up with an authentic-looking playing card of their own. Mr Stilon instructed them on how to create the frame of the card and find the middle of the card by measuring, using a ruler. Then, he demonstrated how to start drawing their character through simple shapes and where on the card they need to be drawn, starting from the head, the shoulders all the way to the details like the hair and outfit. Mr Stilon did not give them too many instructions after these particular steps as to let them be creative in their own way and not to feel tied down to any particular style. 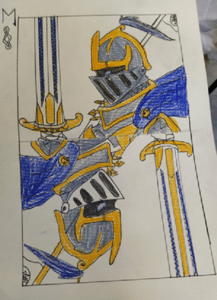 After finalising the character, Mr Stilon showed them the most important factor of the whole project, which was a technique using tracing paper to create an exact symmetrical character opposite the original. This took quite a bit of understanding and patience as they did not get to see the result immediately, so it was a learning process for them.

From this symmetrical playing card project, students were assessed for their understanding of symmetry, their attention to detail, and their technique in executing an authentic-looking playing card. Throughout the lessons, the art teacher noticed students creativity flourishing as all of them came up with different ideas for their playing card, as well as them giving extra attention to the various components that make up a real playing card.

All in all, it was a successful lesson which every student managed to get very good results.